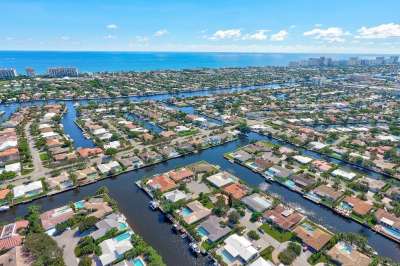 The Landings is an upscale neighborhood in the northern section of Fort Lauderdale. The unusual characteristic of this neighborhood is the fact that each home is located on the water with dockage. The majority of homes are East of Bayview, so there are no fixed bridges to limit the size of you boat. This attractive feature has brought boaters from all over the world to buy into the Landings and enjoy a boater’s dream lifestyle. The land was developed in the early 1960s as demand increased for waterfront property. Many of those original homes have since been razed and larger two-story modern homes have been put in their place. Values remain high as there is always demand from boaters for waterfront properties, especially ones that have no fixed bridges allowing sailboats. Homes mostly start from the low $900ks and up $8 million plus for point lots on the Intracoastal Waterway.

The Landings Homes for Sale