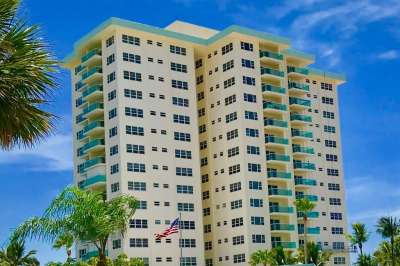 Starlight Towers condominium was built during the oceanfront condo building boom in the late 1960s. Even though it is from 1967 the building looks newer due to the glass balconies they upgraded to several years back. Most buyers guess it was built in the 1980s. Starlight Towers is unusual from other oceanfront condos mainly because of the square footage of the condos. The average oceanfront condo along the beach is 1200-1400 square feet. They focused on smaller sized units to keep them more affordable. One bedroom units can be as small as 686 square feet and two bedrooms hover around 1000 square feet. This keeps the prices among the lowest of condominiums on the sand in Lauderdale by the Sea. Prices range from the high $200ks to the mid $400ks for two bedrooms, but because of the location the views are still incredible. If you are looking on a tight budget and view is what matters most, its hard to beat what this condominium.